Quotes heard while “sleeping” inside the Camper

Look at this little camp-ah.  THAT’s an OLD one.

Look at this one, isn’t it cute.

drunken crowd:  look,  wow, look, (tap on side begin to knock on door), yeah its been to Yellowstone and Oregon (?)

little girl whispers to parents: there’s somebody in there

another crowd comes around, taps, starts knocking, Girls voice of reason: shh, shhhh, there are people IN they-ah,  another says: I’m gonna Parcours off that thing!

male: That’s what I want to live in.   female: Harold, that’s why we don’t live together!

young woman: Nice house!  No REALLY.  I just want to lay in there and listen to the rain on the roof.  So cool.

man in SUV: I want to do that with my wife.  She’s in a wheelchair so I’ve got some figuring to do.

That thing is Bad-Ass!  I could live in something like that!

Look how old This thing is.  Its in good shape too.  Its like an antique. 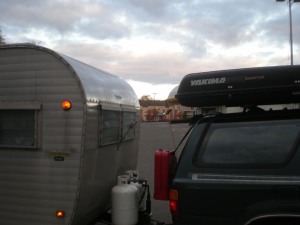 A glimpse og the ‘rig’, including emergency fuel and water along with the cargo roof box thanks to Jane and Craigslist

Most recently during a quick interior tour of some details, Jason: “you were a machinist!”

This entry was posted in Strange Camping Spots and tagged David, Jane. Bookmark the permalink.

7 responses to “Quotes heard while “sleeping” inside the Camper”