We have been that snobby type of person who will not shop at Walmart because we consider them part of the “evil empire” (Verizon is, in our snotty opinion,  another part of the evil empire, for different reasons).

They, Walmart, have probably caused the demise of many small, locally owned businesses. They take up a vast amount of open space in previously rural areas, etc, etc, blah, blah, blah…

But, lucky for us, Walmart has a policy that allows campers/trailers to stay overnight in their parking lot. We were enroute from Baxter to Acadia National Park. It was late and we were tired.

So, it was with some reluctance, but with gratitude also, that we pulled into the Walmart in Bangor, Maine. The contrast between “camping” in the Walmart parking lot and camping in the wilds of Baxter State Park could not have been more dramatic. 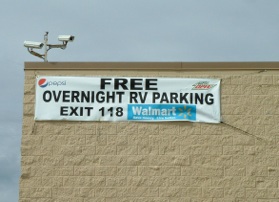 Noise, lights, and a parking lot cleaning machine roaring past repeatedly soon after the store closed made for some culture shock!

We actually did go shopping at our Walmart host store. It was the least we could do. Of course, that’s their plan. Pull in, shop, stay the night and shop again in the morning. We fell right in line with that plan and so now we are People of Walmart!

I just had to add; the first Bangor gas station had a huge caterpillar treaded jack hammer going, cars rushing in and out, and all of the city cascades.  Once driving and looking for a shoe store, we were immersed.  The likely prospect was in a mall!  They were hosting a Breast Cancer Benefit Dance, so I was wishing Jane had on her Survivor tee-shirt.

Then, after three trips back into the Walmart hardware department for screws etc. (I installed a shoe bag organizer among other details) we found ourselves in the Tramper.  Foil over the windows to block light and once again, we slept great in our comfy bungalow.