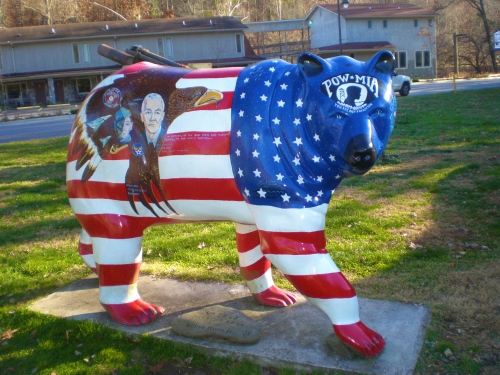 Some cities decorate cows, others crabs (like Baltimore). Cherokee invoked the great spirit of the Bear. This one seemed especially apt to commemorate Memorial Day, when we remember and thank all those who  made the ultimate sacrifice while serving our country.

Posted in Photos, Strange Sights, Travel in the USA

Photo of the Week #7

Wonder if she said “Yes”? Mr L sure put it out there!

The Queen Theater is a historic cinema palace, with a campaign to save her now underway. Check it out:

Posted in History, Photos, Strange Sights, Travel in the USA

Now that we’re back home in Baltimore, we’re finding that some things don’t change. Like the fact that we only go downtown with out-of-town people.

Time was, Baltimore downtown was like a fascinating, shiny magnet drawing me southward to experience the sometimes elegant (Belvedere Hotel Owl Bar), sometimes quirky (The Horse You Came In On in Fell’s Point) nightlife. But, nightlife now consists of early evening dinners or movies with friends and relatives. All with the convenience of needing to drive no further than some suburban restaurant or theater. That way, everyone’s home by 10:00. Which used to be the hour when I was just finishing the final prep for an evening out. Bars and clubs I frequented didn’t really get hopping until midnight. (Did I really just date myself by saying “get hopping”?)

I digress. I didn’t start this post intending to go on about my defunct nightlife.

So, lets get back to the main topic, which actually is – visiting one’s own hometown. The Maine-ahs had traveled south to check out Towson University and absorb some southern Spring weather! Snow was still on the ground up North.

We took the Light Rail to the Inner Harbor.

On the platform with Amanda and Jake in the foreground, Nancy and Brenda in the background. 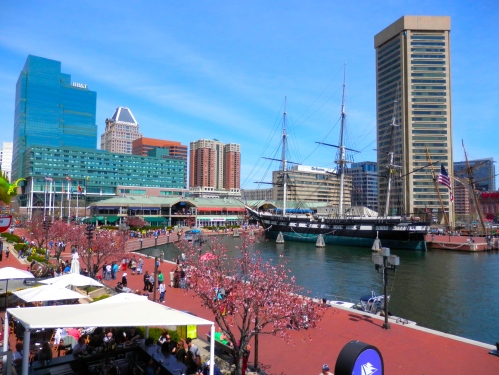 Baltimore’s Inner Harbor. Harborplace, the frigate Constellation, and our own Trade Center tower.

We did a little shopping and a little strolling, thoroughly enjoying the gorgeous day.

No agenda, just hanging out. We took a harbor boat tour. 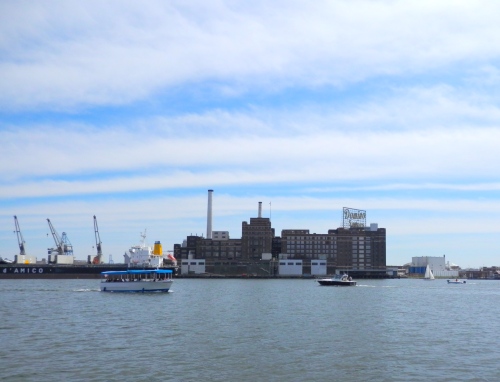 Domino Sugar, complete with D’Amico tanker unloading the sweet stuff from the tropics.

The Domino Sugar sign is a harbor landmark. We buy Domino brand sugar just to keep the lovely neon shining over the water at night (not pictured because I was at home in my PJs by the time it was dark).

Fells Point as seen from the docks. 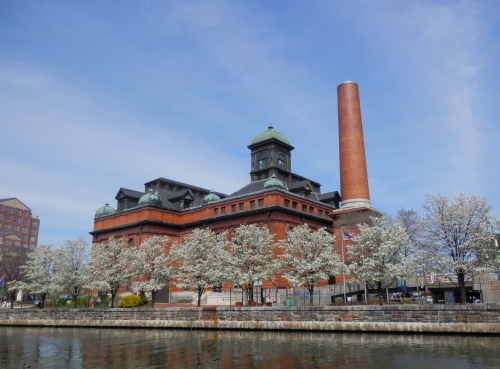 The Public Works museum, above, was built in 1912 as the water pumping station for Baltimore. When I was young person flouncing around the city, legend had it that this building was the City Morgue, complete with a chimney for the cremations! Reality is not nearly as dramatic as imagination sometimes.

We were very lucky to see the Pride of Baltimore II, in her home harbor between worldwide voyages. It’s a beautiful reproduction of an 1812 privateer with an education mission as well as serving as Baltimore’s ambassador to foreign ports.

The Pride of Baltimore II

Amanda outside the Under Armour store in Harboreast.

After the harbor cruise, we came back ashore to visit the Under Armour store in Harboreast – one of the highlights for our Maine relatives who are also big Ravens fans. 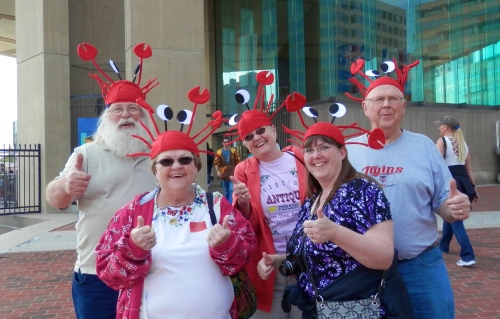 Before heading home on the train, we met these happy folks, reveling in the fun side of Baltimore and gettin’ crabby.

My home town made me proud!

A close family member is a Civil War buff. Not a reenactor, just an interested American. We visited Harpers Ferry, WV on a gorgeous, early Spring day. At 60+ degrees, we enjoyed the sunshine and warmth. 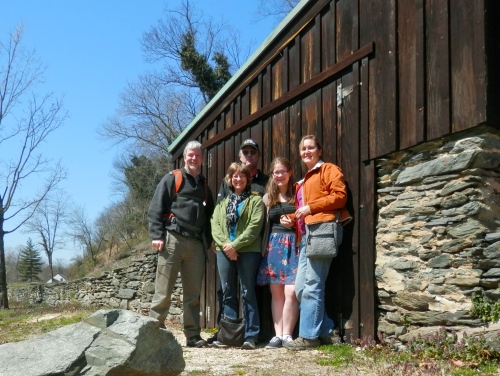 Here’s our group with David at the left and me at the right.

The East has such beautiful, old towns. Harpers Ferry is carefully preserved for all to see.

So much history! Harpers Ferry saw the skirmish with abolitionist John Brown that is said to have sparked the onset of the Civil War. 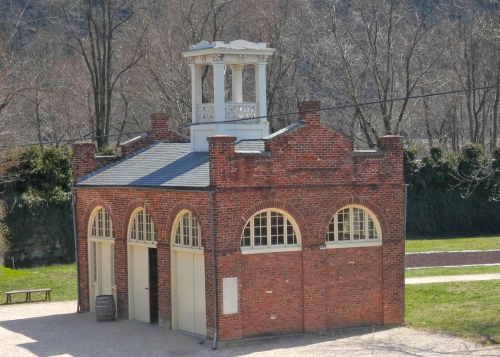 The Federal Armory firehouse where John Brown held forth. Attacked by the U.S. Marines, Brown was captured and hanged. 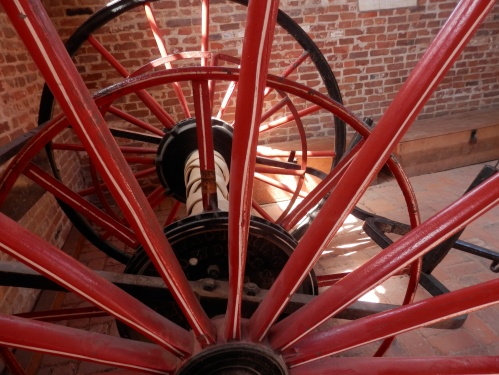 Inside the firehouse. It appeared so small, considering it’s importance in our history.

The town, at a strategic meeting of two rivers and the railroad, was important to the war effort of both sides.

At the confluence of the Potomac (left) and Shenandoah Rivers. The railroad and two canals (the C&O and the Shenandoah) also served Harpers Ferry and connected East and West, North and South.

We walked the railroad bridge across the Potomac for a hike in the woods.

Harpers Ferry changed hands, from Union to Confederate and back again, 8 times during the War. 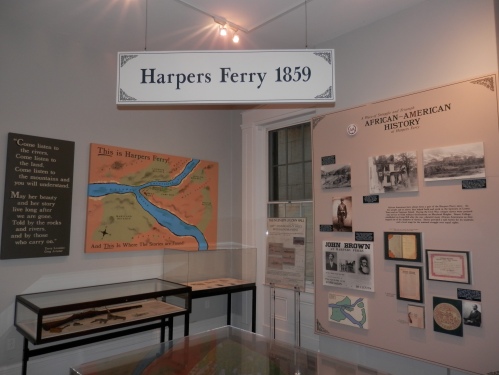 Lots of interesting history was revealed in the beautiful Information Center.

Some in our crew had been to Harpers Ferry before and some were seeing it for the first time. The beauty of the day belied the tragic nature of the bloody war that nearly tore our country apart. Such was the effort required to end slavery and unite the States again.

Posted in Family, History, Museums, Photos, Travel in the USA

Photo of the Week #4

Twelve and a half years ago, these two storms gave New Orleans a double-punch of hurricane winds and water.

In December, 2012, this photo was taken. What happened to the folks who lived in this house? Where are they now? Will this house be rebuilt or torn down or simply decay in its abandoned state?

Just one block from the levee, surely it was inundated. More than a few times. It’s a miracle it still stands at all.

Such were some of the sights seen on the Voyage of the Tramper.