Knowing me means you also know I don’t sit still well.  Rain isn’t the reason I am not doing much of anything right now.  I’ve been waiting for a return call with an estimate for repairing the head gasket etc on the 4Runner.  In the pre-dawn hours I rambled online through the SST (special shop tools) I would need, thought about what I could rent or borrow and pretty much avowed I wanted to take the motor apart right here in camp.  After investigating a few options within camp and awaiting “one more phone call”,  I humbled myself to ask a favor from a neighbor camper (Jason, the only other camper right now as all the “climbers” have gone home).  I needed a ride 2 miles to get my propane bottle filled.  I would not be balancing the big white “30lb” bottle on my bike, nor carrying it walking.

Jason readily gave me a ride up Rte 32 to get a propane refill while his own water heated for a before work shower.  Even Jack at the stove store was ready and started to to call around and suggest a good mechanic for us.  Then Jane and I decided to ride our bikes a bit.  Jack made us aware that a rail-trail was being developed and it started right here in Rosendale. 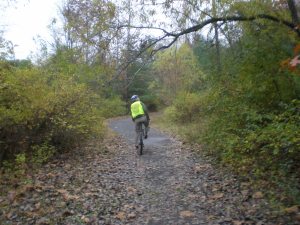 Rails-to-Trails is one of my few regular charities.  Rail-trails represent a nice, semi-paved entry into green places that most people would never see.  Jane and I are not most people.  We like to “mountain bike”, so narrow, rooty or rocky trails are our favorite.  Railtrails can be boring, but of course without a car we had to go somewhere.

After our brief hour or so, the trail proved young and unbuffed, yet still a nice old rail trail.  We stopped at a local bike shop and asked about Single-track trails.  Warnings were heard that rifle season starts Sunday and pretty much all trails require a drive to get to.  I tend to talk a lot and explained our dilemma.  A customer overheard and began to offer suggestions.  He knew everyone around here. Although a world traveller, he had over sixty years of history here and friends in every direction.

His bike fixed, he offered to call or take us to some of his connections.  Unused to accepting help, I mostly stood agape.  My delayed replies seemed to include, uh, uh if you want or think you should. By adventures end, he drove us “just up the road” in three or more directions. It may have been a half hour of driving before we all introduced ourselves to each other.  Byron is a most gracious man, he even expressed his own cautions and misgivings referenced to the last time he did a traveller a favor (an RV sat in  his garage for a year).   We visited Rick, a longtime friend (he skied everywhere with him, shared the coldest day of his life at 26 below zero).  Rick is a master craftsman, detailing a 1932 hot rod with a flathead waiting on the floor in his shop.  The frame project looked near completion, as Byron joked about the 2 years its been “sitting there”.  Rick and his son, a world-class snowboarder and “crazy kayaker” who goes over falls are sort of hobbyist mechanics.  They work on just enough jobs to satisfy quality and bills I guess.  Byron says Rick just works til he gets mad, then goes out of the shop for a while. Anyone who has actually worked on a car would see the humor and sanity in that strategy.

Some two-minute jobs become hellish 2 hour perseverance tests: My pre-trip replacement of  the rusted-stuck, flimsy little fuel filter, tucked under the frame and cross member would be a prime example.  I couldn’t use a torch or grinder as the sparks would have enjoyed the dripping gasoline more than I could stand, wrenches were crushing it as I tried to protect the in and out-going fuel lines.  Even a hacksaw wouldn’t fit.  I kept pecking away using a broken hacksaw blade clamped into vise-grips and eventually: The mechanic had his way.  I cut through the hexagon, nut-shaped portion several times til it succumbed and unscrewed like it was supposed to.  I did have to crawl out and stretch, breathe, and breathe again, but didn’t leave the garage on that one.

Rick said he couldn’t even start on my car for about two weeks.  We’re not in a hurry, but we can’t be in port without a car for that long.

Next, we drove to Byron’s own home where he offers to let me use one of his sheds.  I’m afraid 15 miles from the camper without air tools, a torch, or my own home’s resources and contacts could be frustrating.  Who next?  He suggested a few options and Chilcott’s.  Chilcott’s has several mechanics, the shop is meticulous and Byron has known Alex Chilcott since they were kids.  He calls and talks to Alec, then thrusts the phone to me.  “How do you know the head gasket is blown?, did someone tell you?”  I give the story and symptoms…he nods by phone, agreeing and says they could do it.  “Don’t think it’ll be done in 2 days though”…because the heads have to go to a machine shop, it could take a week.

While dropping off the truck I meet Mike.  He almost tries to talk me out of “putting that much money” into the car.  I know everything is uncertain, but my research has unveiled many of these V6 Toyotas burn through their gasket, then go on to live a productive life.  Besides, the brakes, shocks, rear bearings, muffler and more are new.  I put 50 hours into preventative jobs in the three weeks before we left town.  Used cars are complex electro-mechanical devices.  Roulette is an unforgiving game and my best intuition, call-outs to Lynn in Cumberland, and other research says:  Fix what you’ve got, keep the known variables.

What a remarkable day.  We started without knowing what we’d do “all day” and were chauffeured through steps of help we barely even asked for.  People are Great.

OOPS, almost forgot.  Upon being dropped off in our driveway, our camper neighbor, Jason, invited us over for Brats on the grill.  We brought pasta salad and potatoes for a great picnic-table fireside feast.  The rainy day has turned to just cloudy and held off long enough to relax, eat and hear about non-destructive testing, dye-penetrant and a short contract in NY City.  People are Great.

P.S. This morning the professional warning call came from Chilcott’s, this was to be an expensive repair.  I was prepared for that and offered my sweeping, parts-cleaning services or anything to defray the cost…we’ll see if they have any reception.  I told them they could ADD to the bill if they didn’t like my work!

Our new friend Byron was really incredible. He gave us hours of his time, even showed us his lovely home that he had built himself many years ago. David’s so right – people are great and we are lucky to have found another one here in Rosendale, NY!

It’s easy to forget the natural goodness of people when someone in their car cuts you off or when reading the horrors on the front page of the newspaper. (I date myself – I meant the newspaper online of course!) Reality shows thrive on  showing the nasty side of the human race. But, everywhere we go, we seem to find the kindness of strangers…

Here are some photos of our railtrail ride today: 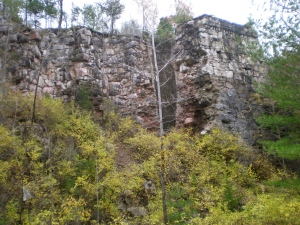 The day was wet and dreary and no one else was around, which added to the spookiness of this abandoned cement kiln from the 1880’s. 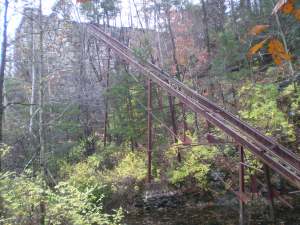 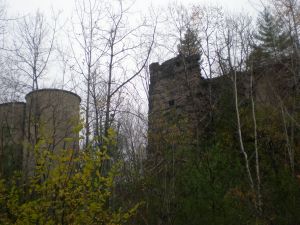 I imagine folks, now long gone, working at this site in the 19th century 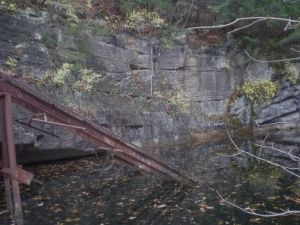 The conveyor ended somewhere in the bottomless quarry, now filled with dark water