A few days ago, we were looking for a place to camp for the night. When we arrived at the campground we’d found on the map, it was closed. For the season. Darkness was falling rapidly. Finding a place to camp and then parking the camper is many times more difficult when it’s dark. We really did not want to drive on into the night.

So, we called the phone number on the campground sign. David, in his charming way, explained a little bit about our plight and darned if the sweet little old lady who owned the campground didn’t invite us to park on her nearby front lawn! Amazing!

The Tramper spent the night in Miss Pauline’s front yard.

Miss Pauline was as cute as she could be, but she wasn’t a total idiot. A relative was also living on the property so I guess this gave her confidence in offering her land. She was also most likely ‘packin’. Probably had a 12-gauge behind the front door. In the mountains of western North Carolina? Oh, yes she was!

Well, on to the reason for this post: We did 2 amazingly fun mountain bike rides 2 days in a row. The 2 areas were amazingly similar. Both were along the shores of reservoir lakes in western North Carolina’s Great Smoky Mountains. 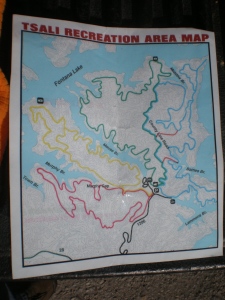 Such fun we had! Whoop-dee-d00’s, roller coaster banked turns and sweeping s-turns. The trails were really well built and really fast. So fast that I often felt like I was following the White Rabbit down the rabbit hole. A bit disoriented, not knowing what was to come next but going with it. The Tsali trail was also often at the edge of a precipice, made higher because of the drought that’s been going on in this part of the country.

It will be interesting to see how I do when we return to Baltimore and ride the Merriman’s trail again. That trail is a barometer for me. We’ve been getting so much exercise…

David found a pile of rocks to climb.

Click the photo and you’ll see David near the top.

Down one side and up the other

My legs are jelly. My arms are tired. My butt, well let’s just say it’s tired, too. As the sun sets on another couple of great rides, it’s time to climb in the 4Runner and take the Tramper on to the next stop… Georgia!

I will do my best to avoid scolding all of us for a history that is past and cannot be changed.  As heard anecdotally, we should learn from our history, to avoid the same mistakes.  “Those who do not remember the past are condemned to repeat it” George Santayana.

During undergrad at Essex Community College I attended a wonderful class called the Sacred Art of Indigenous Cultures, taught concurrently by two instructors.  Each was equally intelligent and credible, but they often contradicted each other emphasizing that study of history, fossil or fragmented remains, and artworks leaves something to the individual to interpret.  Interpretations change from person to person and from time to time.  Kind of reminds me that when I was a kid, the Indian was a fierce savage and the Cowboy was clearly portrayed as the good guy.  Later, we seem to deify the indian and wish we could live in half their harmony.  Even that 1971 “Crying Indian” commercial with Native American in the canoe paddling through an industrialized river with a tear in his eye sits heavy on my memory…Maybe thats part of why I still don’t litter?

We, of course, were all curious about this museum.  Horses, arrows, pottery, tepees, buffalo, turquoise, harmony, feathers and all.  Yes, there must be beautiful sights for us to see.  The Museum too tries not to scold us.  The town of Cherokee seems  to broadcast two messages:  1)Transformation Through Forgiveness and 2)Unity!  WOW.  Gandhi right here in America.  Like Martin Luther King – peace under violent oppression.  All of the most admirable traits of religion and philosophy lead this way.

There is a traveling Cherokee sculpture to spread the message of forgiveness.

Even the rail-trail graffiti was encouraging. 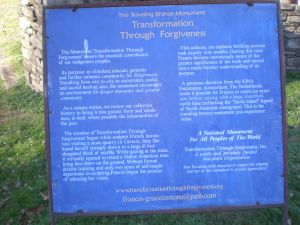 The museum was informative and led us through exhibits following a timeline.

The Paleo period 13,000-10,000 years ago showed the stone tools and spears of earliest Americans, Cherokee ancestors.

The Archaic and Mississippian periods from 10,000 to merely 500 years ago saw improvements in climate, leading to easier hunting, agriculture and “more free time” allowing the beauty of daily tools, pottery, baskets and adornment.  Much of our impression of the Cherokee, of course is “post-contact” as we could only chronicle what our culture was there to see.  Square foundation houses, meeting halls, sweat lodges look like any pioneer period you’d expect.

Of course the trend accelerated by about 1540.  Settlers poured in faster than they could forge a life of their own.  De Soto brought Spanish explorers in search of gold and riches, but brought disease and decimation also.  Despite an open-hearted welcome, coexistence was not to be.  In 1762 as emissaries of peace, Chief Ostenaco went with several other Cherokee leaders to England to meet King George III and declared mutual peace along with allegiance to the King.  A proclamation was sent back to British settlers to allow Cherokee to continue their ways unfettered.

Probably the real death knell was the American Revolution when this edict was repeatedly ignored as settlers demanded land and moved into the best territories.  Against the recommendations of statesmen such as Henry Clay, Daniel Webster, Davy Crockett the government enacted the Indian Removal Act of 1830.  By 1838 the U.S. forcibly exiled the remaining Eastern Band of the Cherokee.

Approximately 16,000 Cherokees were moved into pathetic stockades in groups of 1,000 beginning in the spring of 1837 and continuing throughout the fall the following year. Under the command of General Winfield Scott, the Cherokee were driven west by 7,000 soldiers and volunteers. Some in covered wagons, but most walking with little more than shared blankets as their only protection.  An estimated 4,000 Cherokee Indians died during the almost 200-day “Trail of Tears” by disease, malnutrition and exposure.  They were afforded no privacy, no sanitation, meager food, and slept in groups on the ground between daily forced marches.

Over 30 treaties were inflicted on the people from 1684 to 1835.  A final deal of $5 million in compensation and 13 million acres in what is now Oklahoma was closed by  Andrew Jackson despite admitting an Indian saved his life once, as he signed the final removal papers.

We are familiar with other reservation photographic policies from powwows and previous travels.  Out of respect we took no pictures inside the Museum, If you would like to see them, everything is available on their website.

Before we went in, Jane and I hung our heads down half jokingly.  But, near the end of my tour, I cried.  It seemed like a good deep cry, I wasn’t really witness to the indignities but empathize.  I think I am MOST relieved to see the town’s peaceful messages as direction for the rest of the world.

Funny Phrases From the Road

How many huckleberries does it take to kill a cow?

explained: (not technically from this road, but heard in a McDonalds near Hagerstown)  Several men speaking freely across the dining area. One says, huckleberries are poisonous.  The other asked; How many…

A man’s gotta love a woman who smells like bacon.

explained: Jane helped Gordon making a breakfast feast including hash-browns, eggs, and bacon.  The large grill was really rolling under his restaurant-trained hands.  After preparing and eating the meal we changed out of pajamas for the day. That night, unfolding those PJ’s and getting ready for bed…my Jane smelled like bacon.  We both roared with laughter when I told her with a lear.

You don’t need a map to get to Sackville, you just go straight.

explained: While driving on Provincial Highway 1 in New Brunswick, Canada we stopped for coffee and directions.  After filling the thirsty 4Runner I found the coffee was free.  No Mega-store selection with the drowning gulp sizes, just a simple pot, small styrofoam cups and creamer in the fridge.  Jane asked about maps.  Oh, the nice grey-haired man said; you don’t need a map to get to Sackville, you just go straight.  And, infact you do.  Highway 1 runs right into 2, the Trans-Canada Highway which then runs straight into Sackville, New Brunswick home of the prestigious Mount Allison College, where Anne is teaching.

Bring a flashlight, you don’t want to surprise a skunk.

We had some good maps here; seems they are are torn out of the guidebooks.

ezplained: Heard after chasing the elusive “?” information symbol for miles to the end of a peninsula at Black Harbor, a helpful employee seeks maps in the little guidebook from one of those big racks of tourist pamphlets.

I feel like I have someone else’s teeth in my mouth.

explained: David after biting his tongue and/or cheek for the umpteenth time

You two must really like each other, if my wife and I did this we’d be at fisticuffs.

explained: Jimmie’s reaction upon stepping into the Tramper for a tour at Tsali Recreation Area Mt Biking trailhead, North Carolina

I have lost control of my batter

explained: Jane while making latkes for breakfast in Hayesville, NC