A few days ago, we were looking for a place to camp for the night. When we arrived at the campground we’d found on the map, it was closed. For the season. Darkness was falling rapidly. Finding a place to camp and then parking the camper is many times more difficult when it’s dark. We really did not want to drive on into the night.

So, we called the phone number on the campground sign. David, in his charming way, explained a little bit about our plight and darned if the sweet little old lady who owned the campground didn’t invite us to park on her nearby front lawn! Amazing! 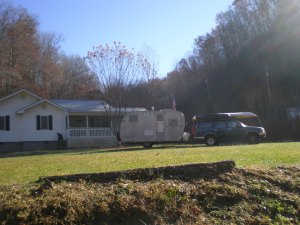 The Tramper spent the night in Miss Pauline’s front yard.

Miss Pauline was as cute as she could be, but she wasn’t a total idiot. A relative was also living on the property so I guess this gave her confidence in offering her land. She was also most likely ‘packin’. Probably had a 12-gauge behind the front door. In the mountains of western North Carolina? Oh, yes she was!

Well, on to the reason for this post: We did 2 amazingly fun mountain bike rides 2 days in a row. The 2 areas were amazingly similar. Both were along the shores of reservoir lakes in western North Carolina’s Great Smoky Mountains.

Such fun we had! Whoop-dee-d00’s, roller coaster banked turns and sweeping s-turns. The trails were really well built and really fast. So fast that I often felt like I was following the White Rabbit down the rabbit hole. A bit disoriented, not knowing what was to come next but going with it. The Tsali trail was also often at the edge of a precipice, made higher because of the drought that’s been going on in this part of the country. 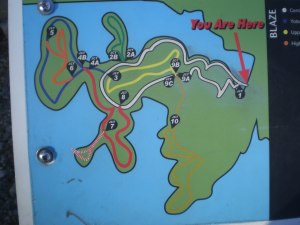 It will be interesting to see how I do when we return to Baltimore and ride the Merriman’s trail again. That trail is a barometer for me. We’ve been getting so much exercise…

David found a pile of rocks to climb.

Click the photo and you’ll see David near the top. 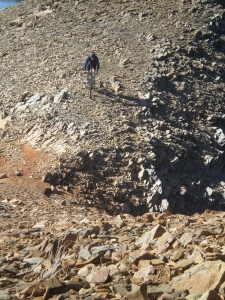 Down one side and up the other 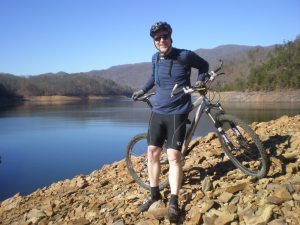 My legs are jelly. My arms are tired. My butt, well let’s just say it’s tired, too. As the sun sets on another couple of great rides, it’s time to climb in the 4Runner and take the Tramper on to the next stop… Georgia!