On the way out of New Orleans, we visited the Oak Alley Plantation in Vacherie, LA.

It’s a beautiful place, separated only by a levee from the mighty Mississippi River. In it’s time it was a sugarcane plantation. Wise investors and devoted historians have saved it from the ravages of time. 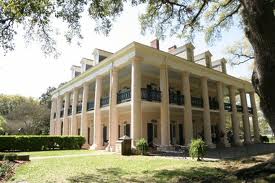 Now, it’s an educational site. It gives a glimpse of antebellum life for all the people who lived there.

That now includes the slaves who made the whole thing possible long ago. Time (and shame) had eradicated the wooden houses behind the ‘big house’.

Now, the slave quarters are being rebuilt and acknowledgement of the system of enslaving other humans for gain is being rendered.

The roster of ‘inventory’ is reproduced on a plaque. This list bears silent witness to generations of suffering. Human beings, listed as possessions… 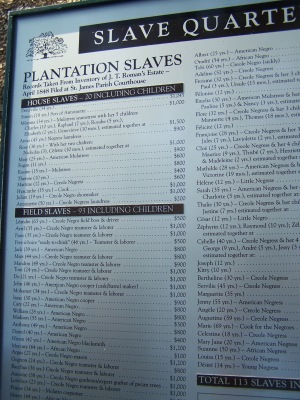 Hard to imagine, the owning of people and the state of being “owned”! Notice on the list that families are not listed completely. The women and their children surely had a husband and father but these facts are ignored.

Credit has to go to the foundation for producing this vivid accounting of human suffering. It’s nothing for them to be proud of, but it is a fact.

My folks, in this era, were quite poor, working very hard to keep body and soul together. But, my folks were free. Free to live where they chose. Free to be who they needed or wanted to be.

Sometimes we all long for the Good Old Days but never the days of slavery!

This entry was posted in DAY posts and tagged History, Jane, scenic beauty. Bookmark the permalink.