I ease into most days with the well-wishing of others back home in my mind.  Seems every day someone is helping us get going, do a little laundry, blessing us, or just joining us for a laugh.  We do that often and sometimes with little provoking.

The Tramper and 4Runner Truck are performing pretty much flawlessly.  The poor truck does “ping” sometimes on the highway when I abuse it trying to keep with uphill traffic .  Premium gas, cautious shifts of the automatic transmission and overall patience keep that to a minimum.  Any of you who know what  pinging is (or have heard of it but don’t) may be aware that its like hitting the pistons with a blazing hot blacksmith’s hammer 3000 times per minute.  Essentially spontaneous combustion occurs to an unstable mixture of fuel and air before the piston even reaches it’s top position where it should await an explosion lit by the spark plugs you pay for that job.  That’s where power comes from if things are running right.

I brought the Toyot (missing the A on the tailgate) to a few small shops to see if anyone had time to squeeze in a look.  Both places were gracious, the first mechanic was middle aged, but wore a mohawk.  It was hard to look him in the eye much.  His shop was booked.  The next guy was familiar with 4Runners as that’s what he drives.  Steve squeezed me in this morning for an oil change, transmission fluid change, and to aim a timing light at the 3.0 V-6.  It is as good as  it is going to get; So, my patience and smaller roads will preserve the motor.  I Hope.  Oh yeah, he said GOOD LUCK on the trip, take your wife out to dinner and didn’t charge any labor!  ($33 bucks: wow, the world is full of good people)

In Acadia I heard a guy in the Market and Grill mention making pie while we ate breakfast.  When I asked about a slice, the waitress said they didn’t sell pie.  So in a moment Michael (we think) came over and said we could have a slice.  He had made 4 pies for Church and social groups, with one going to his co-workers (or employees) at the grill.  He insisted Jane and I share one, warmed and A-la-Mode’.  Wow, what a baker.  I think it was better than the ones I make with subtle wisps of flavor and a delicate crust.  (the world is full of good people)

In New York we stopped at what could have been a kitchy-artifice of a country market.  A glance saw tchatchkies , knicknacks, candies and handcrafted items.  Closer scrutiny bore out the deep roots; this is a Farmer’s store.  Produce and blacksmithed items at reasonable prices.  (A sizable weathervane for ~$50)  When we met the proprietor I knew it to be the real deal.  Doug and I traded yarns while he checked out the Tramper, each with trouble finishing his story before the other wanted to speak.  By the end, I told him he could borrow the Tramper after our voyage.  Seriously.  A pair of tires or a battery would be good rent and it would be out of my driveway for a month or so.  I don’t know if it was his smile, handshake or stories that gave me the confidence in mankind.

Back to the people supporting, nurturing our ride.  A long-time friend who used to let me watch him restore Indian motorcycles and Willy’s Jeeps (I was about 6 years old) certainly kindled my adventure and mechanical roots.  When I researched small trucks on Craigslist part of my selection was confirmed by the previous owner Steve, who had purchased it for his son who now had to go off to college at University of Maryland.  Steve shook hands on the type of deal where trust meant he would hold it until we returned to buy it in a few days.  No deposit required.  I almost felt bad pointing out the work I’d be doing to get it through inspection and safe.  Of course the $300 price break came in handy for rear axle seals, bearings, and rear brakes.  I had to dip into savings for the rest of the parts: front brakes, 4 shocks, mud flaps, muffler, hoses, belts, fluids and “all”.

A surprise came when neighbor Billy brought over one last present, a Dietz kerosene lamp of about the same vintage as the trailer.  He had also donated several small details, some used, some stored at home; an awning and poles, a big plastic water tank. 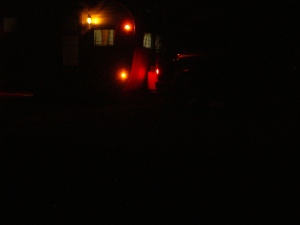 Look carefully, the left light is a 50 year old kerosene lamp (better picture to be posted) Thanks Billy!

When I was trying to make new Birch look like old Birch I trialed about 20 different stain combinations.  It was serendipitous  that I met Dave, a customer at Woodcraft, who showed me the perfect product.  A small bottle of Brown Maple Aliphatic Dye to measure into the shellac, ml. by ml. until the desired hue is found.  Wonderful.

We mentioned Tom and Jean who came and fed us one eve during our hurried final packing.  And, of course, Jane’s recovery from that pesky but benign biopsy. They packed us champagne and steaks.  Wow.  We feel so privileged.

Jane and I both felt compelled to get really good hiking boots.  Jane’s slip and fall while descending the Sterling Pond “bouldering-staircase” cinched it for her needs.  An old pair of Vasque boots had been overheated by a fire ring at Lykens a few years before and were failing.  My own boots were >5 years old from LL Bean and were lasted like a pair of buckets.  We searched the internet which led us to the mall and a store that didn’t stock boots in Jane’s size. The clerk there said, “check Sleepers”, a store next door.   There we met Demarre and Matt who fervently helped as if they meant it.  Matt’s family makes maple syrup so we are well stocked now!  We bought a wine bottle FULL  of Maple Syrup…dark and sure to be delicious soon.

When it came time to leave Maine we went to a gravel pit and weighed the rig.  A business called Ferraiolo’s in Farmingdale didn’t bat an eye as I drove between dump trucks, front end loaders, and gravel spreaders with my little lumbering Tramper.   The scale man was cordial, said the price would be 5 or 10 bucks.  After we finished, he asked for $5.  First I drove onto the long steel plate, total weight: 8,640 lbs.  Then the truck alone: 5,220 lbs. that leaves the Tramper at 3,420.  I guess I’ll look at the ratios, freight rates and see just how bad, or good it is to get the 12-ish mpg we’re getting.  Oh yeah, the people.  He was smiling and eating a tootsie-pop.  Just the right touch to a down-home send off and a cheap way to see how much our load weighs.

Small, five-year-old Parker made us a book of art and helped us on our Raystown, PA  test run.  His dad Steve graciously loaned us his Dodge truck.  perhaps nicest and most frequently seen though, is the cool quilted Tramper banner that hangs proudly at our door.  Donna gave this to Jane days before we left.  We travel on love of family and friends.  We miss you all daily and take note of or take pictures of things you each “just have to see”.

Yes, there is indulgence in this journey.  But, too we feel there is some amount of inspiration.  Good People Everywhere.  Plus, we demonstrate the possibility of doing that dream that you’ve always dreamt! (even if it doesn’t involve traveling in an aluminum box for a year).

One response to “More People!”