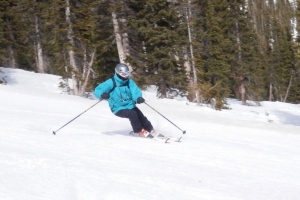 Yesterday, in the sack lunch room at Ski Monarch, we met a very nice couple. Their names are Jon and Naomi. They’re from Maine. 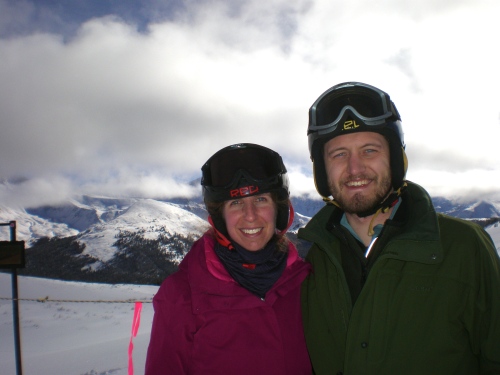 Naomi & Jon. Married about a year! Isn’t that cute!?

Of course, we blabbed on about our trip. And we gave them one of our new cards. (Yes, we ordered up some ‘business’ cards. After being asked if we had a card many times. So, now we’re cool.) 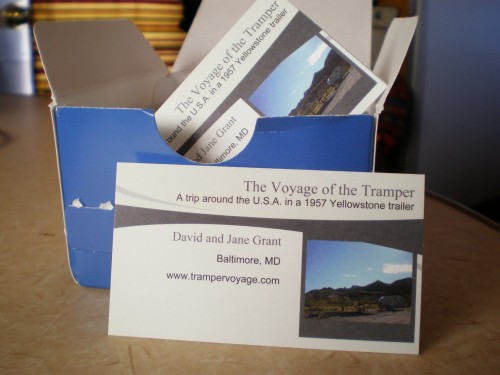 We liked Jon and Naomi right from the start. We had that lovely ‘instant rapport’ going on. You know the feeling. When you have things in common that make you feel comfortable right away, but your curiosity is piqued and you want to spend some more time together. 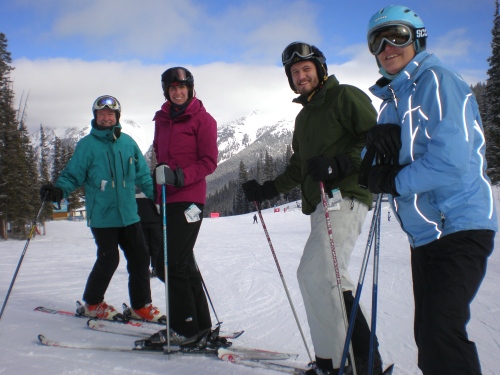 Our new friends mentioned that they were going to try Copper Mountain ski area the next day. While David held his breath in anticipation of revisiting Copper, I asked them if they wanted company. I told them to check out the blog and send us a comment if they had an interest in skiing with us. 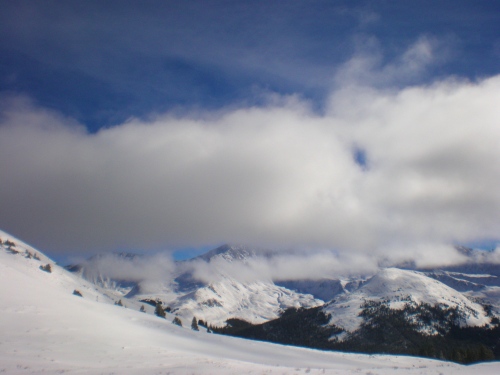 David said later that he wasn’t going to push for the Copper side trip but he sure was glad that I brought it up. David taught skiing at Copper, back in the ’80’s.

Of course, we are loving our ‘home’ mountain, Ski Monarch. It’s everything we hoped it would be: low-key, inexpensive and close by, with that beautiful Colorado snow and big scenery. 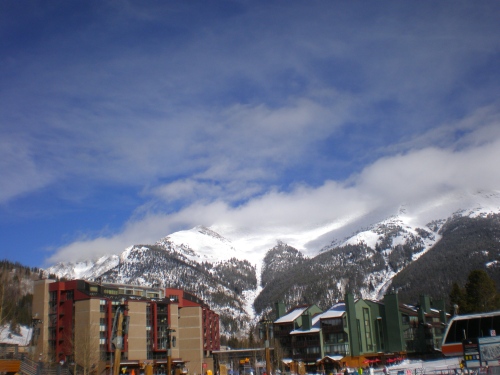 Some of the Copper Mountain base lodges

But, Copper Mountain is a different sort of resort from Monarch. It’s huge! Many times more lifts; much more acreage. It’s glamorous. And expensive, so Copper would be a rare treat for us.

We heard from Jon and Naomi later in the evening. Yay! We’ll have a fun day at Copper! We packed our ski bags and went to sleep early. 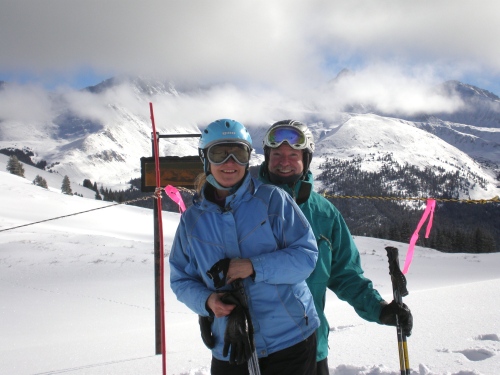 Next morning, we met up with our new friends inside one of the Copper Lodges. We quickly realized that exploring the mountain with them would be a good experience!

Naomi has been skiing for a while; Jon just started a couple years ago; I am a constantly-learning ski veteran and David is the happiest man on Earth right now! 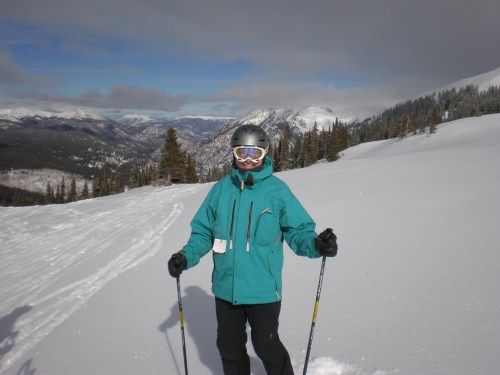 My wonderful David. Happiest man on Earth – to be skiing in Colorado! He says skiing with me makes it even better…

We all skied to our joyful limits. David sprinkled in some really useful tips for everyone and we used those hints, cruising down ‘blue’ runs and testing ourselves on some ‘black diamonds’.

We were absolutely done. Spent. But, someone said (as someone inevitably does)  “Let’s go down one more time!”. And, so we did, closing down the lift on the very last run up the mountain. Whoo Hoo! 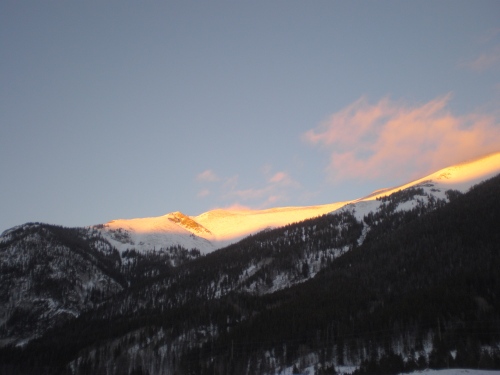 We said goodbye to Jon and Naomi and started the long drive back to the Tramper. The evening Alpenglow atop the now-slumbering mountains bid us a beautiful goodbye.

The wind roars through the Arkansas Valley at the base of Monarch Pass where our little trailer sits.

Gusts up to 45 mph are predicted for this afternoon. Snow showers skitter through the fields, then whirl high in the air around the campground.

Here’s our neighbor, the Livingston’s. They’re full-time RVer’s with 4 sons. Ages 10 to 2, I think. Their  blog is www.livingstonfamilyadventures.com 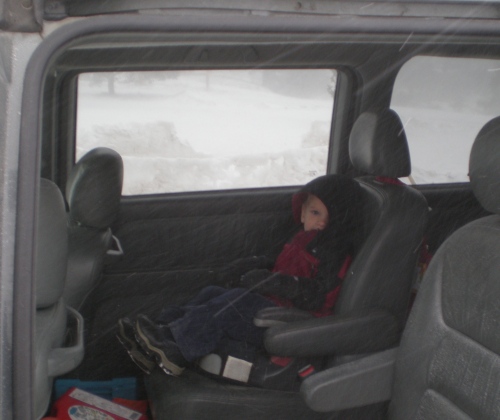 The littlest Livingston, Mason. These boys sure are fun!

David will be heading off to ski soon. I’m hanging out in the Tramper today, recovering from a nasty cold.

It’s cozy in our little home. So far it’s only rocking only gently. I have no fear of being swept away. The trailer is extremely well-built and I haven’t lost that 25 pounds I thought I would on this trip, so we are anchored firmly to the ground.

A tradition I have often carried is to ski very early on New Year’s Day.  Many people have been up late the night before, so I have found that particular morning pretty much crowd-free.  Lack of a crowd makes skiing safer and more fun.  This year we drove through New Mexico, started the year in a new place continuing our grand adventure. 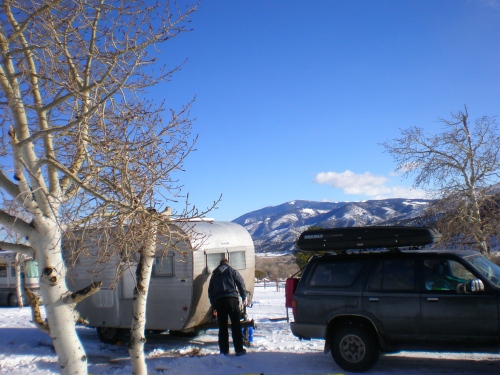 After a very cold night- temps were minus zero- we set up camp at Heart of the Rockies RV park. The Tramper was quite comfortable inside!  In fact, we are working on ways to heat less dramatically…

I had confidence the skiing would be nice, the mountain adequate.  So, here we are.  Standard speed chairs, no high-speed-detachable-quads.  Just as well.  They wear out your legs fast, but worse, they spit too many people onto the trails at once.  More people means the snow wears out faster. 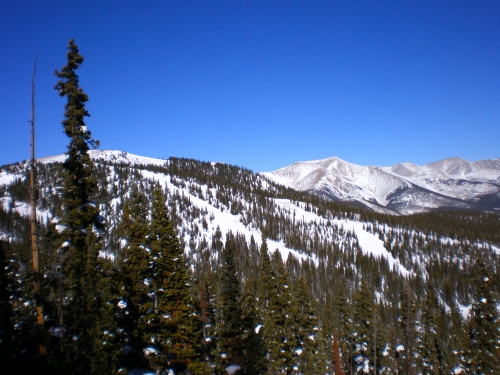 Here today, in this holiday week, we skied right into the queue and rarely waited for even a single pair ahead of us.  There is still soft snow on the edges of the trails from a storm three or four days ago.  Best of all, terrain.

Trails and trails stretch over and around a well contoured area.  The lifts have such simple and informative signs: Beginner lift, Advanced lift.  And the grooming!  We found plenty on smooth, groomed greens to wake up and re-adapt to this sport.

I always laugh at my first few turns.  I can be pretty critical having skied for over 40 years. I have passion for this sport but also the Winter season. I look forward to skiing from the first dreary, cloudy or rainy day of fall.  The warm Summer funs are ending and what next?  SKI SEASON looms to save the day. 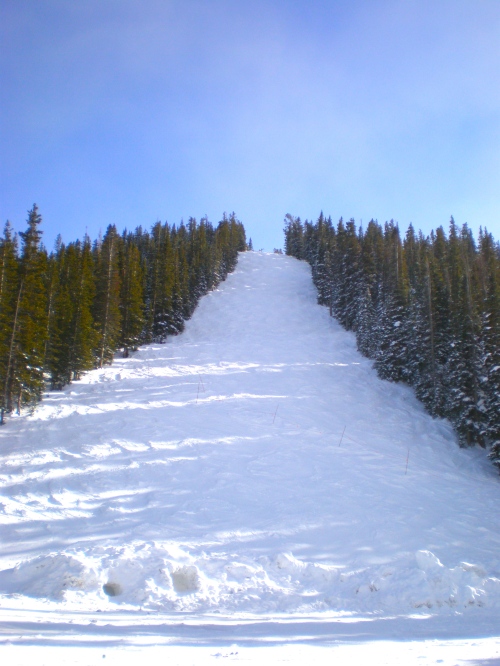 Sweet Fall-line trail, right down to the parking lot!

So there I stand at the top of a hill, inching into that first run.  Its so familiar, I start to turn and usually end up banking far inside.  My body is turning a bike!  I haven’t separated my pelvis and hips from my torso.  Five or six turns later and it starts working, But slalom racing skis are not forgiving.  Flex and edge them and they TURN!  REALLY TURN!  The radius they pick may be based on what you told them, but if you aren’t ready….kapow, they launch.

At home on skis.

Two runs later I begin to remember what I was “working on” last year.  No one could see the subtleties being refined and improved, but there is an infinite realm to explore in any sport.  With skiing it involves a 3-dimensional interplay with a constantly changing surface.

On skis, I know I belong on this planet.  There is a quiet and unencumbered joy.  Both of giggle and get to say Weeee…a lot.  Can’t wait til tomorrow!