In our long road West, we just had to visit Jean-Philippe in College Station, Texas.  Since he moved from Baltimore, we have missed him and his wife Anne.  They are temporarily apart by career investigation needs. Anne is now teaching in Sackville, New Brunswick. J-P is finishing projects here in Texas and abroad in Chile.

In them we found an intellectual curiosity that piques our own.  An ability to work hard, like it, and still have joy to throw into life after work.  In them we find laughter and a hope that earth is a pretty good place to live.  We looked so forward to visiting J-P that we drove hard from New Orleans.  Our one Walmart stop in Lake Charles led to being surprised by the Toys-For-Tots inspiration (see previous post), then back on the road!

The rural roads and dreaded Interstate in these big Southern states have 70 and 75 mph speed limits!  We just Tramp along at 55-60 and let our bright LED tail and marker lights, reflectors and red triangle warn everyone to pass at will.  They do. 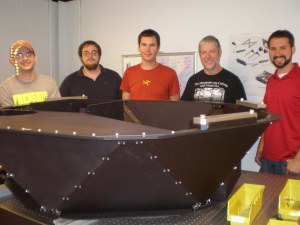 College Station, of course, is the town around Texas A & M.  A multi-specialty University with everything you’d expect supporting and surrounding it.  J-P is a gracious host and guide.  He claims we hosted him with more cooking and feeding.  I’m not so sure, but we do like bringing our own kitchen and bedroom. 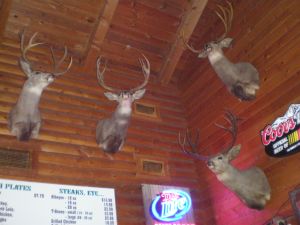 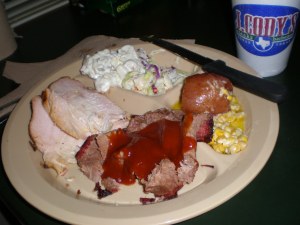 We were treated to several Texas treats.  Mostly we learned Texas has a lot to offer!  It is a more beautiful and varied place than we could have imagined.  There is a lot here and the people couldn’t have been warmer or more friendly.  We ate a fresh grilled Texas steak, oh yeah, delicious!  Sampled fried pickles at a bar and grill named Crickets.  We ate Tex-Mex at Los Cucos and enjoyed really their scrumptious enchiladas, relenos, and then the next night we also ate at a great Texas BBQ, J Cody’s.  There may have been an excess of mounted deer on the walls, but the friendliness was real and the food as moist as a treasured family cookout.  Jane and I especially liked those fried pickles at Cricket’s, now slices instead of spears. 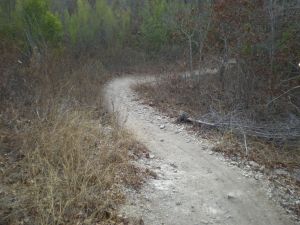 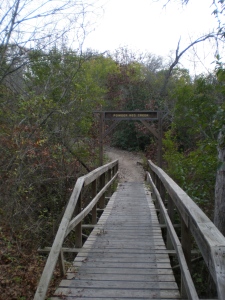 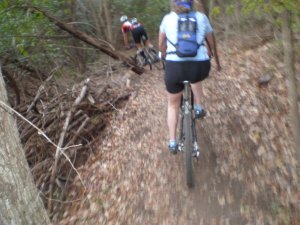 Jean-Philippe brought us mountain biking too.  First we went to Waco, where any of my own preconceived ideas disappeared at a delightful riverside park, Cameron Trails.  A slow level river ride was a nice warmup that led to a mix of old and new trails with names like Hale-Bop, Cedars, Slinky,  and Highlands.  There were trees and hills!  Lots of trees, cedars, pines and a generously thick thicket.  There were smooth buff twisty single tracks.  Lacing them with roots and rocks added the treat we bikers love.  Jane enjoyed the bulk of our ride before insisting I take off with J-P.

He’s  been club riding regularly, racing a bit and is as slim, svelt and fast as ever.  He complimented me in saying no matter what we do, we are always the same speed.  I can’t say I’ve been training, but I also won’t pretend the voyage life isn’t a great diet of play, light good food and Very Regular activity.  We chased each other gleefully up and down for an extra hour and a half!  Aerobic exercise just isn’t work when the trail beckons and a friend is in reach.  Nice to know I still have that “old-guy-strength”.

A rare day of rain led us to rest, go see The Hobbit at a local theater and plan the Tramper updates.  Saturday I bought new tires for the trailer.  Without getting too technical, I wanted a bigger margin of safety.  In Maine, the trailer weighed in at 3460 lbs.  The original tires I selected during rebuilding are “C” rated for ~1800 lbs. each.  They also only held 50psi and seemed to be wearing badly at the inside edge (as seen in the Greensboro, NC posts).  I found wider, slightly bigger tires that are “E” rated for ~2800 lbs each and can be run up to 80 psi.  This should be MUCH better! 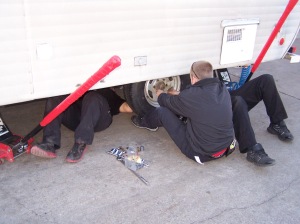 I had also noted that even though the 4Runner brakes were new when we left Baltimore, the truck now pulled slightly Left under hard braking.  A cursory look showed no particular problems.  Closer inspection did reveal an anti-squeal shim that had slipped and seemed a little off.  I knew doing nothing would change nothing.  I also couldn’t be sure whether a new pair of brake pads ($30) may or may not solve anything.  The hydraulics seemed OK, no leaks and no obvious signs of a stuck caliper.  (I had cleaned ’em and bled ’em in Baltimore, evacuating and flushing  ALL old brake fluid with over a quart of fresh Castrol high boiling point fluid).

So there I was with a possible way to improve it without going overboard.  The new brake pads were higher quality, better fit, and infused with ceramic.  I figured the odds trying something were better than the odds of doing nothing and just wondering what was wrong.  Then the guys I met at Napa were super nice too.  Apos is a Geology major and suggested lots of cool stops on our way West in addition to helping out with car parts.

I cleaned things up, popped in new pads and Voila!  It works, No More Pulling!  Sure is nice to pay for parts only.  I solved the problem for about $30 total.  Then on Tuesday morning, I paid someone else do our oil change.  I didn’t want to buy a big drain pan and deal with recycling the oil and cleaning out a pan…just pay the guys at Shell to take care of that.  They too became enthralled with our journey and added a few good suggestions.  Mostly each to a man wished us safe travels!  “Safe travels” spoken like they meant it; it rings so deep when I hear that.

Lastly, Jean-Philippe followed us down near Brastop to a small private mountain bike park called Rocky Hill Ranch.  They host 24 hour races and run the admission fees by honor system, keeping maps available at the “restrooms”.  We had yet another good shared ride, starting with scrambling up Fat Chuck’s Demise (rumored to have brought on an early end to its namesake).  The only bad aspect of this particular start is right off the lot, it is climbing.  Clawing up and around a handful of twisty roots,  laced heavily with egg and potato-sized rocks is a tough way to start.  Mountain bikers sometimes call these loose nodes “baby-doll-heads”.  Altogether they are much easier to roll over on downhills.

When J-P and I added our boy-time ride to use up the last of the light we headed deeper into the forest, finding a great piney narrow sinuous place of middle-ring/middle gear aerobic glee.  We traded leads again and again as we rode hard and steady.  Sometimes I miss racing.   But really, I miss riding hard and steady with such a good host and great friend.  Besides, our non-race rides now often last 5 or 6 hours and we snack and laugh much more than racers ever do! 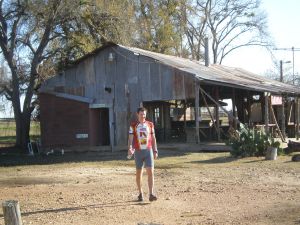 J-P gets ready to ride at Rocky Hill Ranch. 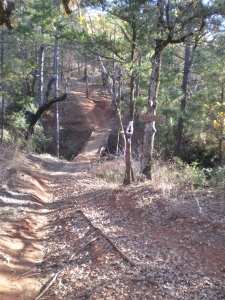