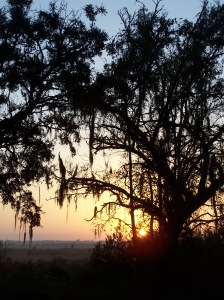 Leaving the idyllic Jekyll Island, I knew further rest was needed.  We sought refuge in a refuge of sorts.  We found a National Forest campground at East Delancy, Ocala National Forest.  Our National Parks Pass, picked up at Acadia, Maine levered us a $5 per night rate and there wasn’t another camper, tent or anyone in sight.  We silently filled out the envelope, added our five dollar bill, and didn’t even see the camp host til noon the next day. 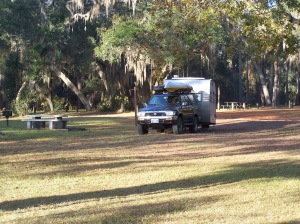 What I saw at dawn, or rather heard was of great delight.  Silence all night broken by an insane trumpeting from pairs of Sandhill Cranes.  I barely caught glimpses of them through the trees, but was afforded a range of tones, calls, and answers from their discussions.

Later in the day, I hung a hammock and found my own solace in Steinbeck’s East of Eden.  If you know me you’ll be surprised to hear I read about half of it in one day.  Half a book.  A real book!  I normally fall asleep after reading about 3-5 pages!  Even some of my most quoted reads lately take me two to three months to read.  Jane and I well knew “I was sick”.

Hammocks are uniquely able to support rest in many positions and fold over lots of book-propping options.   I look forward to our next restful campsite with just the right paired trees.  Thanks Jack the hammock and book donor!