“I noticed the carny nature of your trip”, said the gruff-looking security guard as he allowed us to camp in the ski area parking lot overnight.

I won’t name him nor will I name the ski area where he works. We don’t want him to get in any trouble for his kindness which I’ll describe below.

I wrote down this quote as soon as he said it. It was too good not to note. At one time in his life, he was a ‘carny’ – a carnival worker and a vagabond himself.

After we left Sequoia National Park, we turned Eastward for home. Marfa, the 4Runner, faced one more great challenge: getting back over the Rocky Mountains! But, David wanted to ski a bit more. We were right there, where all the big Colorado resorts were. And, we had a good line on a discount for some of them. 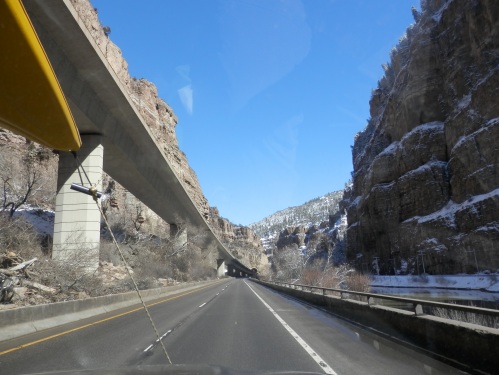 Up and up and up, over one of the passes through the Rockies

So, we picked one and it was a beauty! Fresh snow all over. Deep and puffy and so much fun! Certainly the deepest powder we skied all winter.

But, the one barrier to enjoying all this snow was the Tramper itself. We were in Summit County, a very chi-chi area of Colorado. We were actually rejected by the only campground open. Because the Tramper was too small!! Tiger Run has a HOA (home owner’s association) and I guess the trailer owners have an attitude because they live in an expensive resort town. Phhfftt! It’s still a trailer park, for heaven’s sake!

Soon we will say goodbye to the beautiful West!

We checked into the La Quinta that night. Seemed simpler than driving around looking for a place to park. What a nice hotel! (We have only used a hotel one other time on The Tramper Voyage. In Kayenta, on the Navajo Rez. Because the Navajo Nation has their own laws which we do not know.)

Still, we couldn’t leave skiing behind, yet. So, we decided to do what we’ve done successfully before. Park overnight on the ski area parking lot. Did we ask anyone if we could do this? Nope. Sometimes, it’s better to ask forgiveness than for permission. 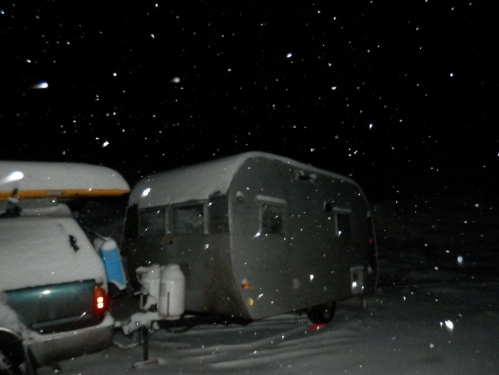 As snow kept piling up around us, we settled in and made dinner. Then, an authoritative knock on the door! David opened up to reveal the ski area security guard. “There’s no overnight parking here. Didn’t you see the sign?”

Well, no, we didn’t. David got out and began talking with this gentleman, explaining why we parked here. David is one of the most personable people I know. He didn’t try to convince the guard to let us stay. He simply began sharing some of the Tramper Voyage with him. Soon, there was a smile on the guard’s face. He turned out to be a kindred spirit; one who had wandered with a carnival! He said that which is quoted at the beginning of the post. He could see then that we were not some 20-somethings who would get drunk and do something stupid. (Apologies to my 20-something friends who would never do this!) 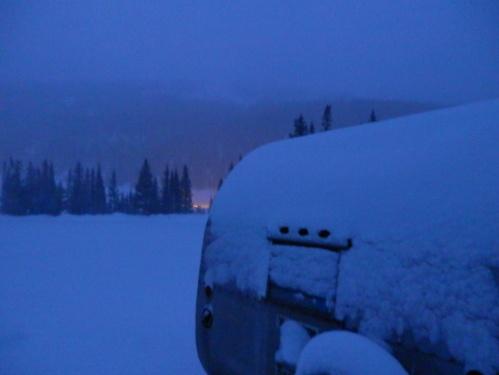 Dawn. In our ‘secret’ location.

The guard showed us to another parking lot. A bit higher up. A bit more secluded. Nicer. Wow! I’m so lucky to be traveling with David. He connected so nicely with the guard. OK, maybe part of it was my sad face!

PS –  In her ever accommodating and sometimes apologetic way, Jane insisted I “take a few runs on my own”.  I don’t always agree to those suggestions, skiing or biking entirely with her is a joy and only slightly slower or less intense than I’d do alone.  But today, up I went above the treeline and into a bowl.  A bowl is a huge open area of snow, usually “bowl-shaped” and exposed.  This one had filled with snow!  Lots of snow!  I like the exposed nature of these places as there are always surprises. High mountain winds can scour one place to an icy plank while, with a little thought, you can find where all that snow was deposited.  Several turns of each of my runs found that familiar ice.  I kinda like ice, having grown up skiing Pennsylvania boilerplate.  But then I found it, each run was also buoyed by the knee-deep glee of a powder day.  Bounding up and down til I was near spent, I laughed my way back to our meeting place before leaving the western slopes!