We are now in California, home of some of the largest trees in the world. The Giant Sequoias are right down the road from the Mojave Desert, in the Sierra Nevada mountain range. 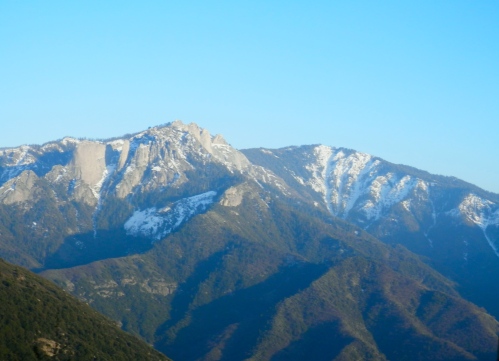 The Voyage of the Tramper has included some superlatives, for sure. And the ancient Sequoias are super big, super old organisms. They are majestic and dignified. The oldest trees are 2,700 years old (National Geographic scientists say they are even older)!

We were visiting Sequoia at the end of the winter. There was snow on the ground and a chill in the air. But the weather was sunny and clear.

Visitors were few. Walk ½ mile into the woods on any trail and you are completely alone with the silent giants.

It was awesome to be among them. You look up and see the massive tree reaching for the clouds. Walk right up to any one of them for a closer inspection.

Except for the tree called General Sherman. At 2.7 million pounds, it “the largest living organism on the planet by volume” according to the National Park Service.

Undisputed King of the Forest, The General has a fence around it to protect the tree from people. Some would touch and love the tree. Others may try to take a souvenir piece of bark. Heresy! A hideous act!

Yet, most people would take a piece of the tree without thinking about the implications of thousand – millions – of visitors doing the same thing. The magnificent General Sherman would be no more.

There are many other Sequoias; about 8,000 specimens in the Giant Forest at Sequoia NP. Lots of them are very nearly as big, and as old, as the General Sherman. I felt honored be among living things that have been alive for almost 3,000 years!

We drove through the silent forest first, stopping now and then for a closer look.

Then, we got out of the car and hiked back into the trees, and saw them standing quietly, regally, in the snow. Each one awesome: a miracle. Looking exactly as they did when John Muir campaigned for their protection in 1875.

The trees themselves were their own protection. When cut down, early West Coast loggers found that they fell apart, into unusable chunks good only for scrap and pulp. Yay, Sequoias!

The Sequoia has natural protection, in it’s amazing bark, from insects. Fire doesn’t destroy Sequoias, either. Thick bark protects the inner tree and branches are high above the flames. New bark slowly grows over the burned base.

Survivor of many fires and still growing! David lends a bit of scale.

Some of these trees show scars from big fires that occur every hundred years or so. At 2,000 years old, that’s a lot of fires!

What a great experience. There are no trees this big on the east coast. Everything back East was logged out at some point during the last three centuries. The trees in Maryland are beautiful but very young. Young, at least, compared to the Giant Sequoias.