Every day here at Monarch Mountain in Colorado is actually pretty much the same. We wake up, putter around the Tramper for awhile, then go ski. After hours of fun in the snow, we come home, eat good food and go to sleep. That’s about it! Eat, ski, eat, sleep, repeat. How lucky can you get?! This life is idyllic. If I could transport myself through space and time to Maryland, in June, for just a few days a month to enjoy some gentle weather, life would be darn near perfect!!

My last post was a little whine-y. How could anyone on a 6 month vacation have much of anything to complain about? So here, in words and pictures, is another day in paradise:

When we left for the mountain this morning, it was snowing! Everybody at a ski resort is so happy when it’s snowing! The lifties smile even more than usual, their badge readers pinging merrily as the skiers and boarders line up for some glee.

“POW!” for powder snow! At the top of the Panorama lift

The skiers and boarders are very happy.

Tailgate party on the parking lot. Only seen when everyone’s happy it’s snowing

David and I sure are happy!

Yep, falling snow makes everyone here happy. Even the people who live and work in the town, Salida, are happy because their livelihood depends on it, winter and summer. (The Arkansas River which runs through this valley it bigger, deeper and faster in the summer for the kayak and rafting enthusiasts, when there’s lots of snow the winter before. Better river = more tourist dollars.)

Now, David and I obviously enjoy fresh snow. Skiing in powder is different from skiing on packed powder, which is how they describe snow that’s been around for a while. We love the fast, hard snow that makes you use the ski to power thrilling, fast runs. Big, arcing turns on hard snow feels like flying! It seems like snowboarders, except for the really good ones who can carve a turn, need fresh powder snow more than the average skier. So, today, the boarders were in their element, too.

We saw a friend David made on the mountain. 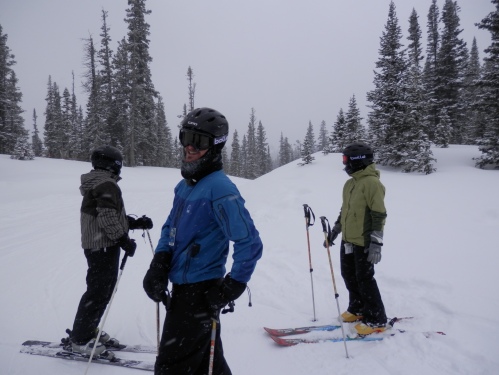 This is Chris, center, with his family on a brief pause during a run

The high-tension power lines that climb up and over Monarch Pass were singing today! If you stop under them, you can hear the snow and wind making them hum quite audibly. I googled it and it seems the snow and wind can cause excess oscillations and “moments” as the power is transferred along the line. Interesting phenomenon, and it sounds pretty cool, but we moved on!

Unusual for us, we went out this evening with some Colorado friends! We’re old and we are tired at the end of the ski day, so we usually go back to the Tramper and entertain ourselves until bedtime. But, Marci and Gabe, our friends from Monroe, LA, and Jeff, our friend from Colorado via Texas, were going out to see a band. 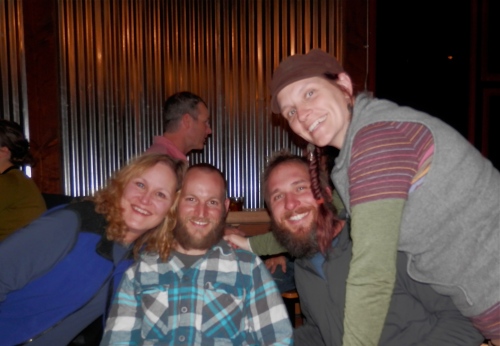 me, Jeff, Gabe & Marci. (Don’t know who belongs to that head in the background)

Live music is something we love, so off we drove into the dark snowy night to a Salida bar called River’s Edge.  “Ethyl & the Regulars” were playing. 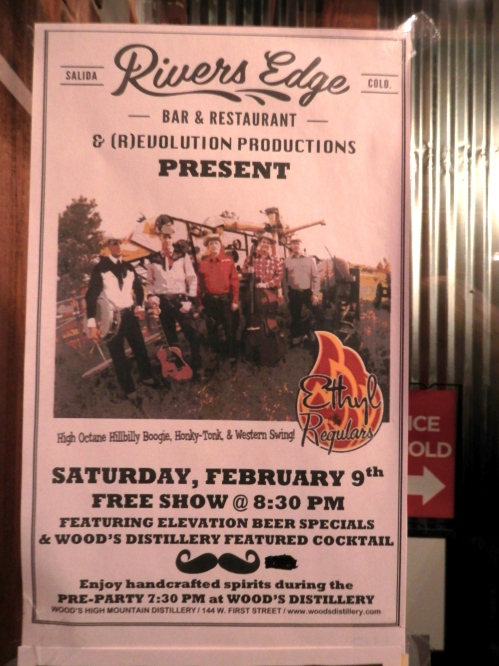 We heard it was to be Swing music. Now, ‘swing music’ to an Easterner is a band with trumpets and trombones and timid guitars.  Not so the Western variety!

No ‘swing’ band in Baltimore has this pedal steel guitar in it! The didn’t swing, they swang!! 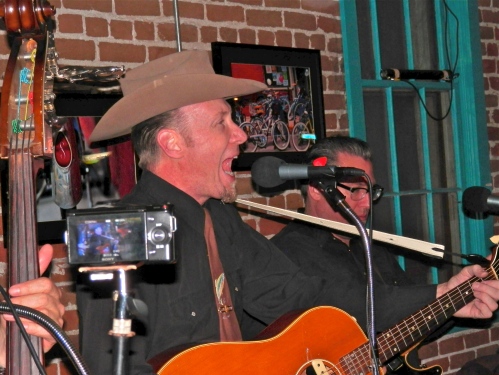 We had a blast! But, even over the music, we could hear the mountain calling. We would ski again tomorrow.

So, we left Salida to return to the Tramper. But not before taking in the giant light above the river on Tenderfoot mountain.  It might not look like much in the photo, but imagine the dark mountain against the black sky, with a giant letter spelled out in lights. “S” for Salida. 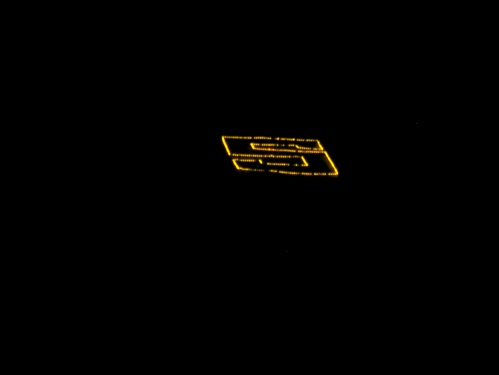 “Big Red Heart” for Heart of the Rockies.

P.S. – We saw a grey fox in the campsite the other night. He stopped by long enough for David to call me to bring a flashlight. What a beauty he was! Of course, he didn’t stay around long enough for a picture, but I found a photo online that looks just like him:

He is much bigger than our red foxes at home in Maryland and his tail and fur were very puffy in the cold. I really wanted to give him some ham, but, of course, that would have been a big no-no! I thanked him for stopping by.